As of March 2021, ten volumes have been published. 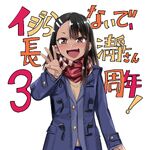 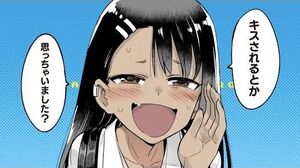 【黒沢ともよ中毒になる動画】イジる長瀞さん！（初心者向け）
The voice of Nagatoro! (Tomoyo Kurosawa)
Add a photo to this gallery

In Japan, on November 2019, the manga sold over one million copies,[1] subsequently raised to 1.2 million on mid-July 2020.[2] On Reddit's 2019 Most Popular Manga series Ijiranaide, Nagatoro-san gained the eighth place, making it the world's most read ecchi manga.[3]

On April 9, 2020 the series protagonists were featured in a cameo on the 27th chapter of Kaguya-sama: Love Is War - Dōjin Edition. Don't Toy With Me, Miss Nagatoro also has a crossover with Azu's "Magical Sempai",[4] and was established to be set in the same narrative universe of Yoshiaki Sukeno's "My Senpai is After My Life" after the latter made several references to Nanashi's fictional manga "School Rumble Shining" (featured for the first time in Chapter 4).[5]

Retrieved from "https://nagatoro.fandom.com/wiki/Manga?oldid=5247"
Community content is available under CC-BY-SA unless otherwise noted.